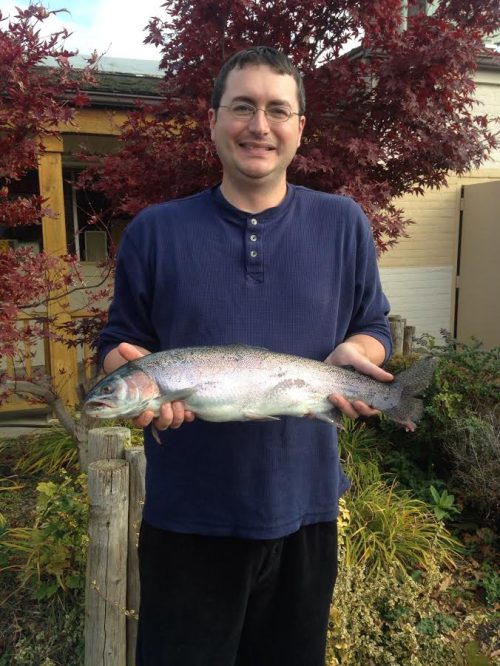 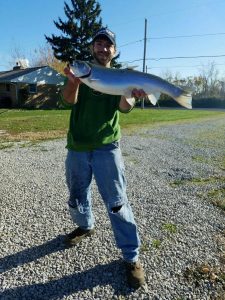 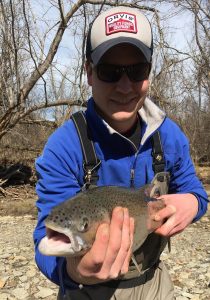 Fly fishing has become a very popular and effective way to catch Ohio steelhead trout. Over the last 30 years, Buckeye fly fishers have come to know the excitement of hooking and landing one of these large and beautiful fish on gaudy bits of steel, fur and feather.

The typical Ohio steelhead fly fisherman uses a 6-9 weight, medium to fast action fly rod of 8-10 feet in length. A rod with an extended fighting butt will help fight and land these headstrong fish. The longer the rod, the better the line control. The fly reel should have a good adjustable drag and an exposed rim. The angler can use the exposed rim as a secondary drag by palming it. One of the new large arbor reels would be an excellent choice. Steelhead are large and strong fighters so it is a good rule of thumb to get the best rod and reel you can afford. â€œFish Ohioâ€ class steelhead (28 inches or larger) have the ability to simply destroy light weight equipment. A weight forward floating fly line is the most versatile and therefore the most generally used fly line. It should be backed up with an appropriate amount of 20 pound test dacron backing, as sooner or later a good steelhead will take out all of your fly line along with a great deal of your backing. Fluorocarbon leaders, flies and terminal set-up all depend upon the fishing technique that the angler chooses to use.

The two most commonly used fly fishing techniques for steelhead are dead drift nymphing and the wet fly swing. Each has its advocates and detractors; its advantages and disadvantages.

Dead-drift nymphing is without question the most productive method used to catch steelhead in Ohio while fly fishing. This method can be used under the greatest variety of river conditions on both large and small rivers, and at all seasons while the fish are in stream. The technique allows the fly fisher to methodically cover all the water and place the fly to within inches of any fish there. It will catch aggressive fish in warm water conditions and it will catch sedentary fish in frigid water conditions. It is, however, an active fishing technique that does require a lot of casting with constant attention to line control. With this method, strikes from the fish are often difficult to detect and fish are often lost due to inattention. The set-up consists of a floating fly line and a long (8-12 feet) leader with a relatively light fluorocarbon tippet (4-8 pound test). Attached to the leader is a strike indicator (a small light weight bobber), split shot, and one or two flies. The strike indicator is set such that the bottom fly will be suspended within a whisker of the river bottom. It is preferable that the distance between the strike indicator and the bottom fly be too great rather than too short. The split shot are added just above the fly or flies and should only be heavy enough to sink the flies but not so heavy as to sink the strike indicator. Some favorite flies used with this method are size 6-10 glo bugs, egg flies and sucker spawn in a wide variety of bright colors including, but not limited to, orange, yellow, red, pink, chartreuse, cream and white. Also productive are a variety of traditional nymph patterns such as the gold-ribbed hareâ€™s ear, prince nymph, black stonefly nymph, pheasant tail nymph, caddis larvae and small wooly buggers in sizes 8-14.

The strike, when it comes, can be difficult to detect. It most often manifests itself as a subtle stop in the downstream movement of the strike indicator. It may begin to slowly sink under the surface. This can also happen if the flies become snagged on the bottom of the river. These actions are indistinguishable, therefore the angler must strike at every stoppage of movement (or any other unusual movement) of the strike indicator. Most of the time it will be nothing more than a hangup on the bottom, but every so often its a steelhead. This technique is the most effective method of catching steelhead, regardless of the conditions, with a fly rod in Ohio. It does, however, require constant attention to detail.

The wet fly swing is a technique that allows the fly fisher to cover a great deal of water in a short period of time. This is an ideal method to use when exploring new or unfamiliar water. It is a most relaxed method of fishing. The terminal set-up is designed to get a large fly to the river bottom as fast as possible while allowing it to swing in the current in an arc downstream of the angler. The intention is to aggravate a fish into a strike. This is akin to slowly dragging a toy mouse in front of a cat â€“ hopefully with the same result. To accomplish this, the fly fisher must add weight to either the floating fly line or to the leader. This can be done in one of two ways: add a section of sinking fly line to the main floating portion of the fly line, or just add split shot to the leader several inches above the fly.

Some fly lines are sold with a sink-tip already built into them but these lack the versatility one would need to fish in Ohioâ€™s steelhead streams. It is better to either purchase or build detachable sink-tips of various weights and lengths. In this way the angler will be prepared for whatever river conditions he or she may find at any particular time. These sink-tips come with (or should be built with) braided loops on both ends to facilitate quick and easy attachment to and removal from the main fly line via a loop to loop connection. The exact length and weight of each tip and which one is best suited to use under specific river conditions is something that each angler must discover for himself through the process of trial and error. Leaders used with these sink-tips are usually short (3-4 feet long), relatively heavy (8-10 pound test), and made of fluorocarbon tippet material. The second set up method is the simplest and most cost effective. The angler need only add an appropriate number of split shot to the leader about 12-18 inches above the fly. The angler would add just enough weight to get the fly to the river bottom but not so much that it is constantly snagging on the bottom. The leader in this case must be longer (8-12 feet long) and is attached directly to the main fly line. This set-up is often referred to as a â€œpoor manâ€™s sink-tipâ€. The wet fly swing technique allows for use of large colorful flies, like the wooly bugger, egg-sucking leech, marabou streamer, rabbit strip zonker, rabbit strip leech, and clouser minnow in black, white, olive, brown, purple, yellow and orange in sizes 4 to 8.

The wet fly swing starts with a cast directly across the river. The fly line is held tight as the fly is carried to the bottom and begins to swing downstream in the current in an arc. At the end of the swing the fly will be hanging in the current directly downstream of the angler. A steelhead may strike at the fly at any point during the swing but most strikes occur in the last half of the swing and are often quite violent. At the completion of the swing, the angler should take one step downstream and repeat the cast and swing, methodically covering all potential fish-holding water. This action will be repeated while moving downstream one step and one cast at a time. Since this technique is designed to draw strikes from aggressive fish, it is the most successful when used during the early fall and late spring when water temperatures are warmer and the steelhead are more aggressive. The appeal of this technique is its relaxed nature, the ability to cover large areas of water, and the savage strikes it induces..