The Ohio DNR has some great tips that Id like to pass along as we approach the Fall fishing season.

“As cool weather arrives it is a perfect time to catch a memory!

For many anglers, lazy fall days are made for casting a line into picturesque farm ponds and gently moving streams. The fish are feeding enthusiastically in a variety of waterways this time of year, as they begin storing up fat reserves in preparation of winter.

Remember that because of cooling water, there is an overall movement of fish to shallower water during this time of year. Check out these quick tips onÂ getting started fishing.

Thousands of rainbow trout, raised at State Fish Hatcheries, are released into local fishing holes and neighborhood lakes throughout Ohio in the fall. This annual stocking provides excellent opportunities for anglers to continue fishing through the fall all across Ohio â€“ and itâ€™s fun for the whole family!

The Division of Wildlife annually stocks five Lake Erie tributary streams (Vermilion, Rocky, Conneaut Creek, Chagrin and Grand Rivers) with yearling Little Manistee River (Michigan) strain of steelhead. These fish migrate out into Lake Erie and spend the summer in the cooler part of the lake, before returning to streams during the fall through the spring.Â Steelhead troutÂ caught by anglers in the streams typically average 25 inches long and weigh five to six pounds. These fish have usually spent two to three summers out in the lake. But there are a good number of fish that are over 30 inches and weigh more than 10 pounds.

As summer turns to fall and many sportsmen turn their thoughts to hunting squirrels, rabbits, or deer, a number of die-hard crappie anglers are cashing in on excellent fishing in Ohioâ€™s lakes and reservoirs.

Late-season crappie are likely to be found near good cover such as fallen trees, artificial structure, or other stick-ups, similar to the types of cover they frequent in spring. However, the best cover to fish during spring is not necessarily the best during fall. On fall outings, look for cover with immediate access to deeper waters instead of those shallow spawning bays that you checked last April or May. In particular, check cover near sloping points, outside bends of creek channels, or steep shorelines adjacent to creek channels. Moving offshore a bit and checking drop-offs near these areas can pay off, too. A less traditional area that also is worth a try is the spillway where moving water may attract and concentrate crappie. Spillways can often be easy to fish from shore and they can be surprisingly productive.

Consider starting your fall crappie hunt during early October. Lakes and reservoirs have usually â€œturned-overâ€ by this time of the year, becoming uniform in temperature and oxygen from top to bottom and this can put crappie on the move. Anglers also should expect overcast days to out produce bright days and late afternoon until dark to be the best times, particularly on reservoirs with clear water. Â You might find yourself hooked by this non-traditional bite!

LakeÂ ErieÂ isÂ a fishery that just keeps on giving! Some late fall November walleye fishermen find that fishing for walleye when theyâ€™re on the move is highly effective. Best baits for walleye are floating jigs tipped with white, yellow or fluorescent coloredÂ plastic tails. 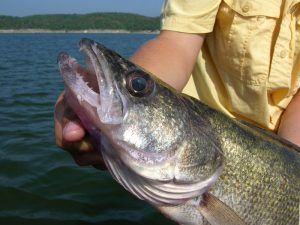 Anglers can find fishingÂ reports and forecastsÂ online.Â Anglers age 16 and older must have an Ohio fishing license. Fishing licenses andÂ regulationsÂ can be obtained online atÂ wildohio.govÂ and at any of the many license vendors around the state.