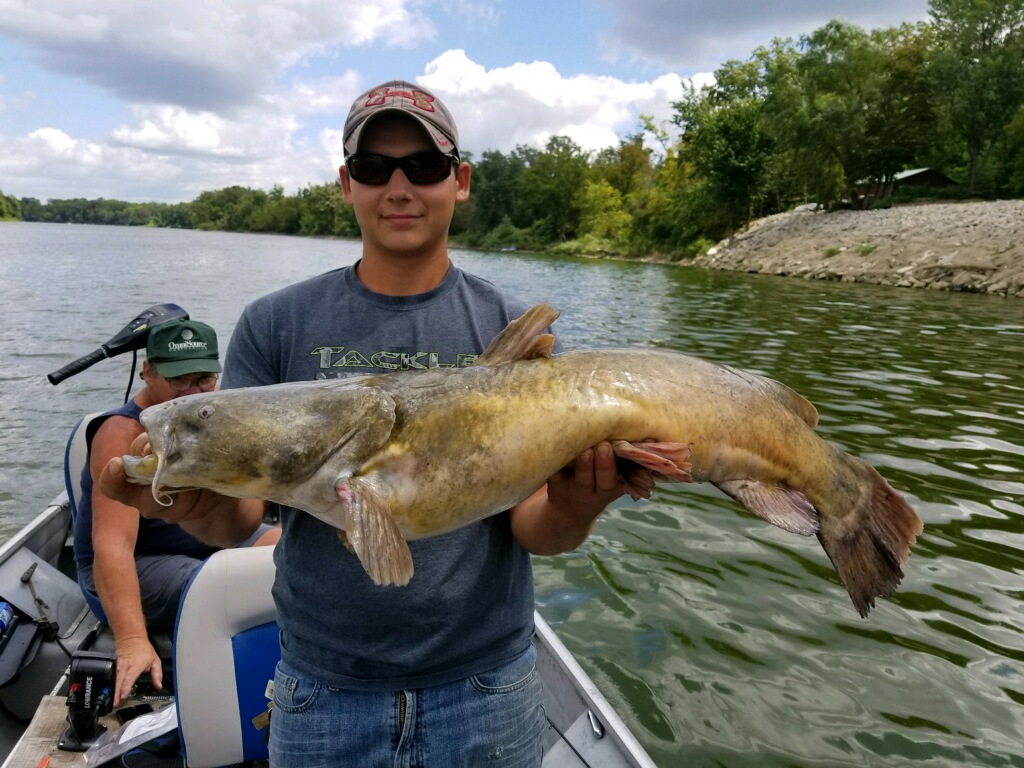 Catfishing has been great this summer . Here are some common myths associated with catfish and  some info about their habits.

Catfish Are “Bottom Dwellers”: They’re not strictly “bottom dwellers”. Yes they do spend time on the bottom but they’re a complex fish that feed through the entire water column including on the top or surface of the water, the bottom and everything in between. If you’re focusing solely on the bottom your not getting in front of all the fish.

Catfishing Is Better At Night? You have to fish at night, right? Wrong! Cats are not nocturnal fish and fishing at night is not required. You can catch just as many cats during the day as at night -especially the flat heads which hunt live baitfish all day long. In fact, many savvy anglers prefer fishing in the day over fishing at night

Do Catfish Sting? They Don’t Sting. Their whiskers do not sting and their fins don’t either. Smaller fish do however have very sharp fins- some call them the horns-that will penetrate the skin if not handled with caution. The fins will hurt like hell if they puncture the skin but it’s not a “sting”.

The “Big Three” Species: There are 3 species of catfish that are most sought after by anglers in the United States, blues, channels and flatheads. They are similar in many ways but are also very different. To be successful you need to understand the differences of these fish and tailor your approach to the one you want to catch!

Channel Catfish: Channel cats are abundant and most widely distributed in the United States. They provide an excellent opportunity for anglers and are among the easiest to learn to catch consistently. If you want fast paced action and lots of fish channels are an excellent option. They also appeal to many because they don’t require any specialized gear.

Blue Catfish: Blues are present in many parts of the United States and are the most sought after species of catfish among hardcore catfish anglers. Theye are not native to the Maumee River  but are abundant in the Ohio river  They grow real  big, they fight hard and can be caught in excellent numbers. Blue catfish are the preferred species of catfish for many because they grow to trophy sizes and generally are present in high numbers as well. This means you can catch lots of smaller blues or monster trophy cats!

Flathead Catfish: Maumee River flatheads are big and tough and put up a heck of a fight! Catching flatheads is often considered by many to be “slower” fishing though they can be caught in good numbers at times. Flathead hunters focus their fishing efforts on catching a few very large fish over trying to fill a day with a lot of activity (size over numbers).

Catfish Change Colors The pigment in the skin will change colors and it’s possible for two fish of the same species to look very different. This is especially true of blues. When blue cats are in clear shallow water and exposed to sunlight they’ll be dark. If they’re in deeper muddy water they’ll be lighter colored. In cold stained or muddy water they’ll be almost white at times.

Catfish Sense Of “Taste”: Their entire bodies and are covered with “taste buds” and are highly concentrated in the barbels or “whiskers” surrounding the mouth. It’s estimated that a channel cats six inches in length has approximately 250,000 tastes buds on it’s body. They’re the equivalent of a swimming tongue.

Walleye Trollers:
Fish coming from: Inside from K Can down towards the Intake in 12-16 feet of water. and some nice fish around Crib reef .Try the War Buoy to north of West Sister, Turnaround Buoy and Northwest Reef. A The shorts are everywhere from what reports we are getting. Crawlers harnesses, Jets and spoons,  and Rattle Tots are working best

Drifters:
Crane Creek, towards the Intake in 14-16 FOW, around the War buoy and around Crib. Crawler harnesses and bottom bouncers or casting erie deries .

Perch:
Most Consistent reports coming from over around H and G Cans. Good catches reported from D Can, North of C can. East of the Intake, and if you head East, Green and Rattlesnake have been good .