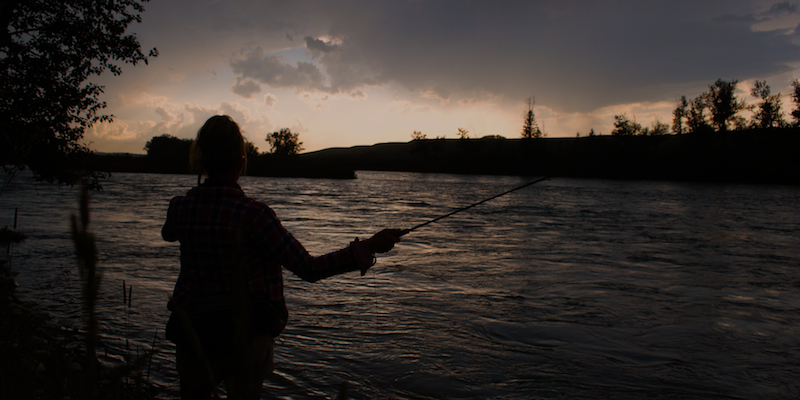 As the nights get cooler the river temp has dropped over 5 degrees in the past few days. This makes for some great endof summer action.one of the best times to fish this time of year is at night.

As I have said there are quite a few species of fish that have been very active this summer. Pike Â out near Metsgers MarshÂ will often retreat to deeper water and Â become inactive when there is heavy daytime boat traffic. Though primarily sight feeders, the big predators switch gears a bit and the night bite turns on. Topwater baits twitched across the surface can result in strikes. Â Target weedbeds that top out just below the water’s surface.

Though channel catfish can be taken during the daylight hours, night fishing is really the way to go. Set a stinkbait or cutbait in shallow water along the quiet shoreline near scattered weeds on the river or lake bottom. Channel cats will move up under the cover of darkness to feed. Â The cats will move up from deeper water and onto the flats to forage. Thats when you intercept them as they move in.

Topwater baits are effective for largemouths after the sun goes down. The splash and gurgle of cone-shaped topwaters are famous for bringing in the bass. We have seen some great success at many of the local ponds and and lakes Â after dark Â using this method . But at times, largemouths can be shy. They may investigate a topwater bait but pass it up in favor of a bait that is a little quieter. On nights like this, when the water is calm, cast a floating minnowbait with a dark-colored bottom. The bait will contrast with moonlight or a starry sky, making it easy for a bass to locate it. Jiggle the minnowbait along on the water’s surface with an occasional tug to submerse it momentarily, then let it rest before continuing the slow, methodical retrieve. Big bass that might otherwise pass up a more aggressive presentation can easily be fooled by this seldom-used tactic.

Walleyes can see better after dark than their prey. Take advantage of the night bite with a 5-7-inch minnow-bait that you either troll or retrieve slowly. Walleyes will slam the bait with abandon when you locate them. Try a dark-bodied bait that will contrast with the night sky. Walleyes will rise to intercept the bait as it moves above them and contrasts with the night-time sky. 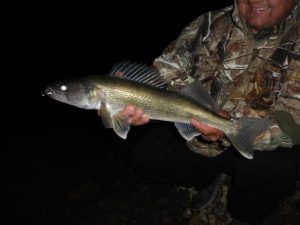 As the nights get cooler we are seeing the water temps beginning to drop. As Lake Erie begins Â to cool, the huge schools of gizzard shad move to warmer shallow waters, especially in and around the mouths of the rivers. The big walleye follow the shad and feed mostly after dark. With the large number of walleye in the lake we have already begun to see night fishing from the banks and piers produce walleye. We are fully stocked with all your crank bait needs which mimic the bait fish the walleye are hunting- Bandits- Smithwicks- Rapalla Husky Jerks and of course a ton of Bombers.

We have a mix of Emerald Shiners and Fathead minnows in stock. 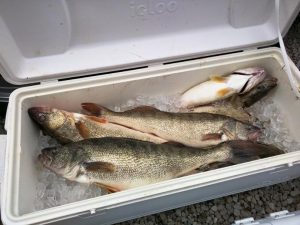 Fish Â from K Can down towards the Intake in 12-16 feet of water
18-20 feet from L Can west towards the intake, and out around the Turnaround Buoy and the Island again, some good word around Niagara, and Crib reef.
Some nice fish being brought in.
Still a lot of undersized walleye but the keepers are becoming more numerous
Drifting
Crane Creek, towards the Intake in 14-16 feet of water, around the War buoy and around Crib reef. Crawler harnesses and bottom bouncers or casting weight forwards.

Perch:
Same story as the past three weeks. Very inconsistent results, nothing sounds fast and furious at the time but they are pulling good fish. Most Consistent reports coming from over around H and G Cans. A and B cans producing again as well.