River is up from the rain we received yesterday. Getting good reports of Crappie from local docks and marinas.

You know the local lakes and river marinas thatÂ  still has docks in,Â  Â some of the best crappie fishing can be found directly below them at almost any time of year.

So what is it about these docks? It doesnâ€™t matter what part of the country youâ€™re fishing, if youâ€™ve got crappie in the water, theyâ€™re bound be around these docks. Granted, crappie love certain docks more than others (wooden docks seem to hold more crappie than metal ones), but once you figure out which docks they prefer and what kinds of baits and tackle work best around this structure, there will be nothing stopping you from hittin those big slabs of crappie.

The allure of docks as they relate to crappie is that these structures provide the necessities that these tasty fish need to survive. Pilings that support docks provide food and cover along a wide range of depths. Bugs, crustaceans and minnows feed on the small plankton, then crappie feed on them. The older docks have algae growing on them, which attracts baitfish, and that attracts the crappie.

Deeper water, at least nearby, is another key ingredient. Shallow docks may produce during certain seasons, but deep-water structures will hold crappie year round. Other than the spawning season, the water depth beneath or at the end of a dock should be at least 6 feet to attract crappie. Docks and piers in shallower water can be productive providing there is nearby deeper creek channels, which are travel corridors that crappie use to migrate in and out of creek arms as the seasons change. Also, around most docks there will be sunken trees, brush, stakes and other man-made structures that have been placed in the water. Many dock owners do this to establish a holding area for crappie and also to hold a larger concentration of fish. 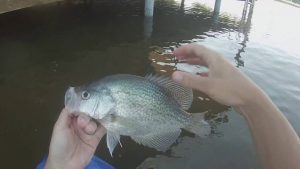 Crappie:
Fishing has been great around the docks and channels as well as creeks in the area. 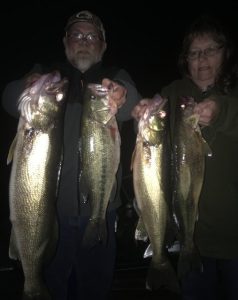 Night Pier Bite
Bite remains great. Casting the reefs, Rip Rap, Piers, and shorelines has been producing early, late and at night (P10’s, Ripsticks, and shallow bill cranks) and there was a good trolling bite out around the reef complex (P10’s Bandits, DHJ 12’s and even Crawler harnesses all still in the mix.)

Perch:
Not many Reports with the walleye bite being hot: Fish are still here and they are still pulling fish around the Intake, L Can, north side of the Picket Fence D and G Cans, NW of W Sister Island, NW of A Can, Flat Rock, and Crib Reefs have been producing as well.