Wow -we had 50-60 MPH winds here yesterday. It made for a blustery day of fishing. Â But despite the difficult conditions we had reports of 5 or 6 walleye taken at Jerome Rd Rapids before the wind got howling and then later in the evening as the wind died down we saw a few taken along the Towpath and at the Ford st. access area.

Today the ambient temp has dropped to the mid 30s but water temp is still good and Â with no howling wind called for today. We know that there is a good number of walleye that have begun to move into the river , but the past week of weather conditions has made it difficult to get to them . Today will be partly cloudy with chance of a little rain later in the day. Â All in all if you bundle up a little bit and it ought to be a pleasant day of fishing.

Over the past week walleye have been caught from Huron to Cedar Point, and west of Catawba near the southeast corner of the Camp Perry firing range. Most fish were caught by trolling with crankbaits, but some have also been caught by vertically jigging.

Today
A chance of rain, mainly after 2pm. Mostly cloudy, with a high near 43. West wind around 7 mph becoming northwest in the afternoon.
Tonight
A chance of snow, mainly before midnight. Cloudy, then gradually becoming partly cloudy, with a low around 26. North wind 7 to 11 mph.
Friday
A slight chance of flurries between noon and 3pm. Increasing clouds, with a high near 30. Blustery, with a northwest wind 10 to 15 mph increasing to 16 to 21 mph in the afternoon.
Have Fun Be safe and Good luck fishing 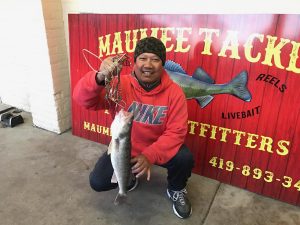 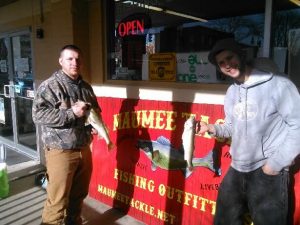