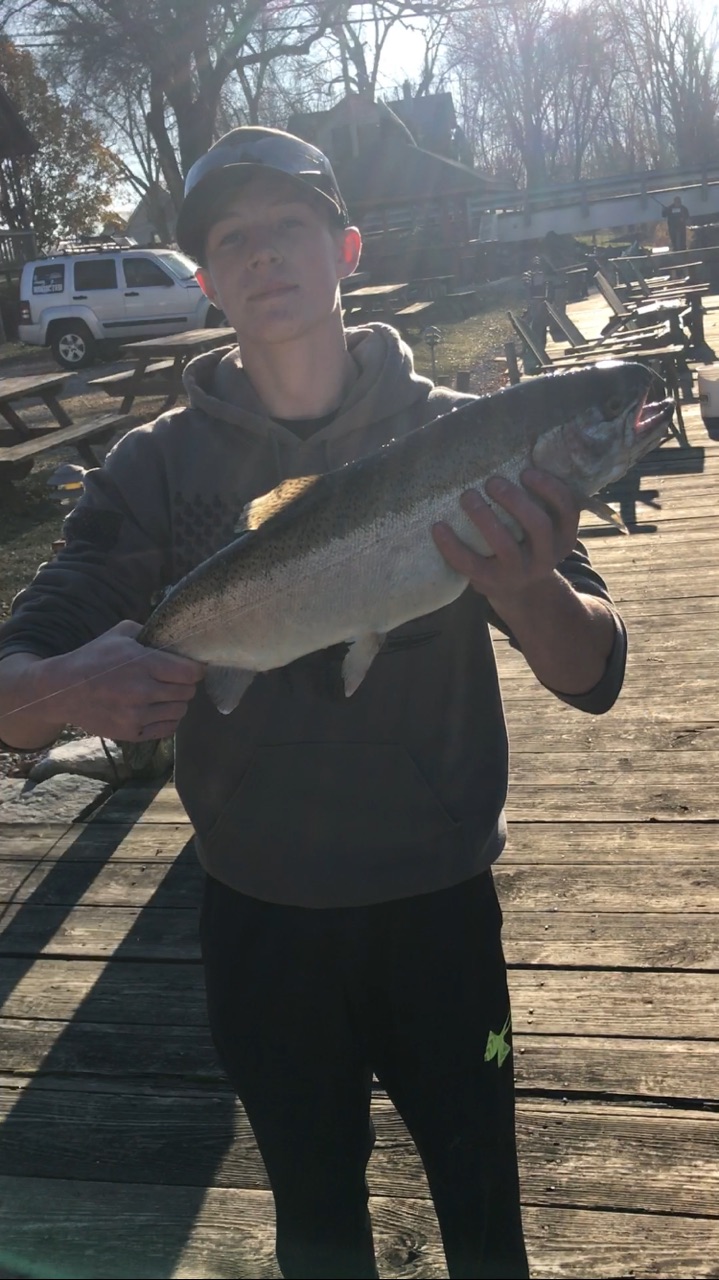 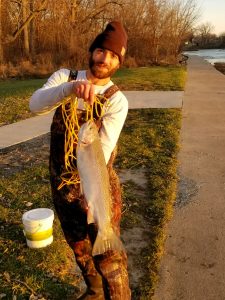 Donâ€™t put those rods away just yet, this is prime time to still be fishing!Â During fall and into early winter, drawn by cooling waters and an ever increasing urge to spawn, steelhead make their way up our rivers connecting to the Great Lakes to spawn. Whether they are the big daddys or the smaller football variety, they are entering the streams now. Some will winter over in the rivers,Â  others will run up and then fall back to the big water depending on the water flow and temperature.Â And just where is this happening? These Steelhead featured were caught up at cold creekÂ  and Grand rapids Ohio by the dam respectively.Â  The wind from yesterday has the water stirred up and muddy but when it calms and clears in the next few days bust the rod out and give those cold water fish a shot. Steelhead river angler knows full well that there is one bait that outshines the others. Day in and day out it can be depended upon to entice even the most finicky of fish. That bait is, of course, spawn. More importantly, it is fresh spawn, still skeined and coming from the same species that you are trying to target. While it is true that steelhead will eat salmon spawn, when given a preference, these fish choose to eat their own. Steelhead are in the business to make more trout. More importantly, each individual is trying to make more of them in their own self image. They want their genes passed on, not some other rogue fishâ€™s. So, by eating, gumming or tearing into any spawn that happens to come by, the fish is doing his part to make sure that their genes have a better competitive advantage. The fewer eggs from other fish mean that theirs will have a better chance of survival.For steelhead, the size of the piece of spawn should be no bigger than your thumb nail. Smaller bags, say in the five to seven egg size range, is even better. Anchoring spawn to the bottom of a hole will catch a fish or two at times, but there is a more consistent method.
By experimenting with different sizes of splitshot, you will do much better when the spawn is able to float downriver at the same speed as the current. It will take some practice, but the real trick is to have the splitshot ticking along the bottom at the riverâ€™s speed.
If it sounds like youâ€™ll lose some tackle you are absolutely right. But, seeing as the steelhead are hanging around the bottom, so should you. Youâ€™ll know that your depth is correct when you lose a hook or two every so often.
For tackle, equip yourself with a spinning reel having a good, as in dependable, drag. Fill it with 150 yards or so of good quality, abrasion resistant line in 10- to 14-pound test.
Couple this with a rod in medium-light action reaching eight or nine feet. While some folks swear by noodle rods, others firmly believe they kill fish by wearing the fish completely out with no chance of revival. The right rod should have a medium to fast action, meaning that the sensitivity is excellent in the tip section with a butt section that has some beef to it so you can turn a hard charging fish.

A mistake many steelhead beginners make is to give the fish its head, allowing the fish to dictate the terms. Do this and you will certainly break off more often than not. By using a good rig you can afford to put the beef into the fish, within reason, and show the fish heâ€™s got a fighter on the other end.
Fish, like all muscled beings, have muscles on each side of their bodies. In order to tire a fish out quickly and bring him to the beach or boat you need to tire the whole fish. Do this by applying pressure from the right and left as well as from above. If the fish is a leaper apply downward pressure by driving your rod tip into the water.
One word of caution here- the key is a smooth change in pressure. By changing with sharp movements you will often cause the hook in the fishâ€™s jaw to create a nice round hole that will allow the hook to fall out. 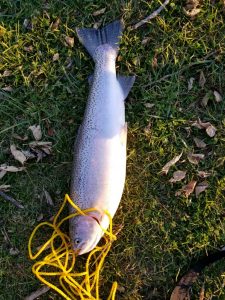 Crappie:
Fishing has been great in local creek channels in the area. Marinas and up near the dam in Grand Rapids. 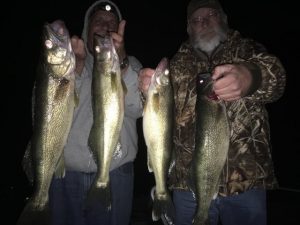 Walleye fishing has been outstanding and should be again in a day or twon when this wind dies down and the water clears.
Night bite out front, at Lakeside, & Huron has been awesome. Casting the reefs, Rip Rap, Piers, and shorelines has been producing early, late and at night

Steelhead are in the area and right up on the rocks within casting distance. Throw stuff with a metalic finish toet some reflection, Shallow billed crankbaits and Spoons would be a good start

Perch:
Not many Reports with the walleye bite being hot, but those that go say the Fish are still here and they are still pulling fish around the Intake, L Can, north side of the Picket Fence D and G Cans, NW of W Sister Island, NW of A Can, Flat Rock, and Crib Reefs have been producing as well.

Have Fun, Be Safe and Good Luck Fishing. 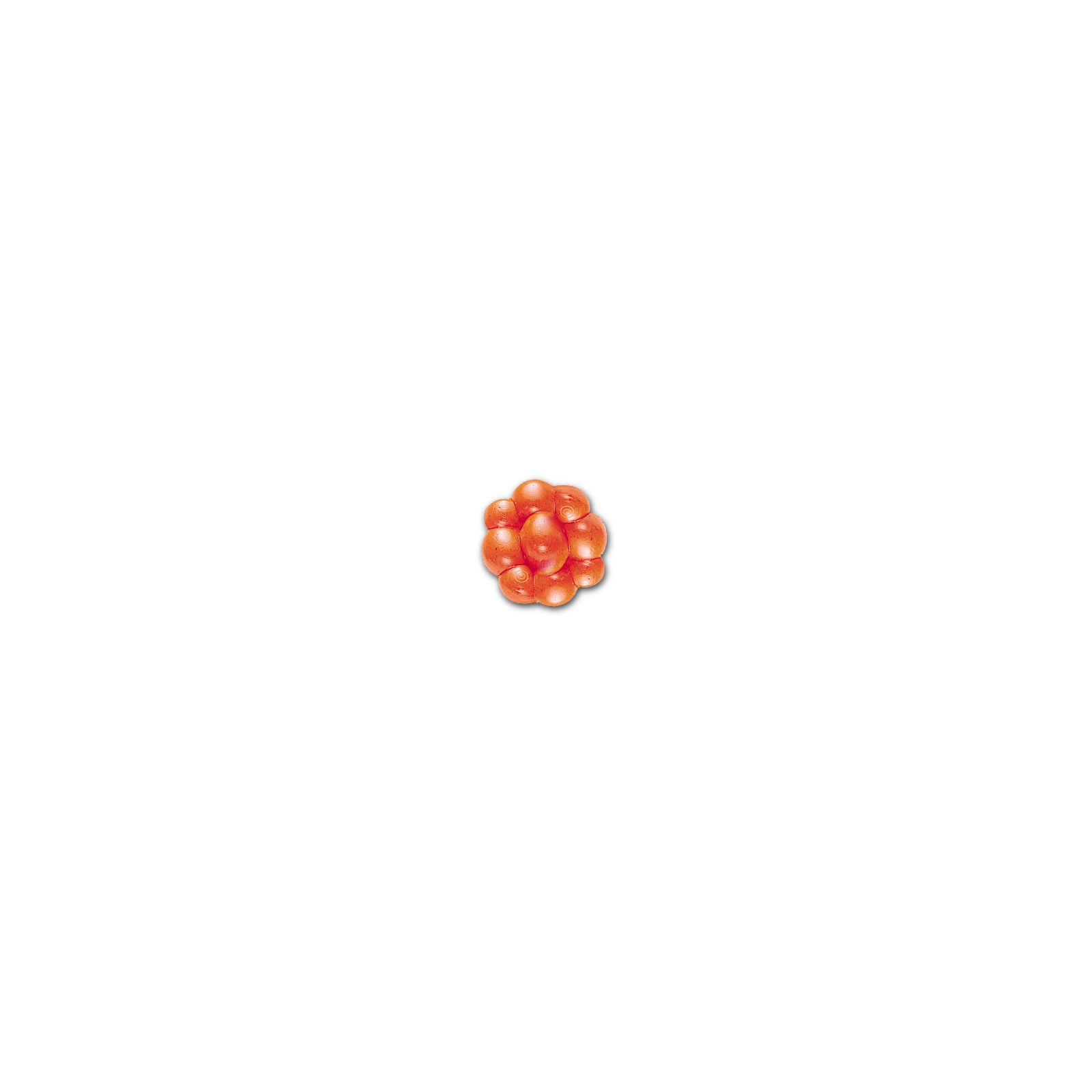