Looks like we will have some rain and storms come thru this morning, but thats ok we need the rain to “Freshen Up” the river so to speak. After this long summer hot spell the temps in the river got pretty high and slowed down all but the catfish. Now that the river is cooling and levels are coming up we are seeing some smallmouth being caught and as we get closer to September  We anticipate Crappie, steelhead, suageye, and walleye to start feeding to prep for winter.

Autumn fishing frustrates many crappie anglers. During fall these panfish often are scattered and hard to find. Crappie may be deep one day, shallow the next and suspended at mid-depths the next. Fish may feed ravenously in the morning and get a bad case of lockjaw in the afternoon.

Fall Overturn in Ponds and Lakes

When fall begins the cool  weather begins lowering the surface water temperature. As the upper layer cools, it becomes heavier and sinks. This action forces warmer, lighter water below, back to the surface. This water subsequently is cooled, just as the previous surface layer was, and descends as it cools. This mixing or “TURNOVER” continues several weeks until the thermocline disappears and all water in the lake is roughly the same temperature. This mixing effect also replenishes oxygen in deep water.

The end result is that fish(CRAPPIE), formerly restricted to narrow bands of acceptable oxygen and temperature, are no longer limited in their movements. Crappie once barred from the coolest depths because of low oxygen levels now may roam freely to much deeper water. Likewise, where once fish could not spend extended periods in extreme shallows due to high temperatures and low oxygen levels, after turnover, even these areas are acceptable. Crappie may now be found deep, shallow or anywhere in between.  So be flexible and target different depths when on the hunt.

When turnover ends and the water starts to clear, crappie often concentrate around standing timber. Here the fish can move shallow or deep as water and weather conditions dictate. On cloudy or windy days when light doesn’t penetrate very far into the water, crappie may be within a few feet of the surface. Bright, sunny days may find them hugging the bottom. Adjust your tactics accordingly. 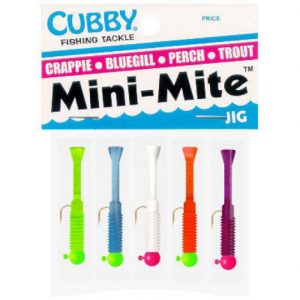 Jigs and minnows are the best crappie baits year-round, but if one or the other doesn’t produce, try a jig/minnow combo. A combination  of live bait(wax worms too) and artificial lure sometimes does the trick for finicky fall crappie.