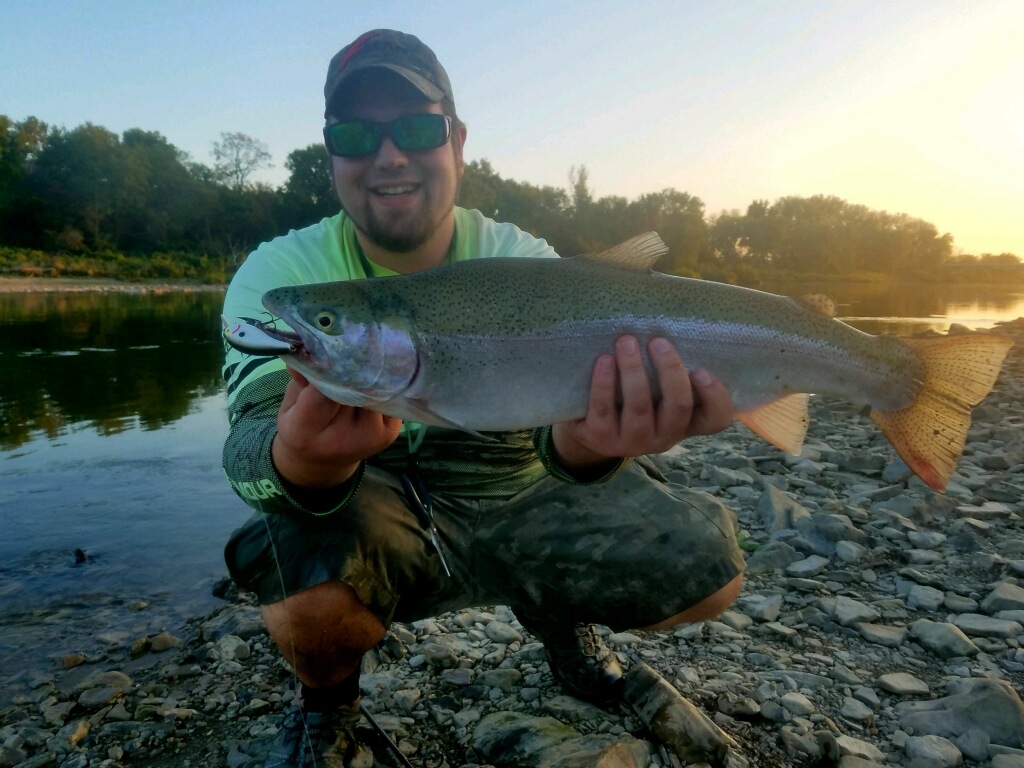 579.5 wading to Bluegrass is possible

Wow -seriously you never know what your going to pull out of the Maumee River. Take a look at this beautiful SteelheadÂ Â Kevin F. pulled out of the river last night while fishing for smallmouth! He and his fishin pal got 3 of ’em , pretty exciting.

More and more we are seeing these steelhead taken right here in the Maumee /Perrysburg area- He threw this mature female back by the way .

Steelhead is a name given to migratory rainbow trout that are born in rivers but spend most of their lives in the ocean or the Great Lakes. They eventually return to spawn in the river in which they were born.Â Great Lakes Steelhead are highly migratory, roaming large areas of the open lakes. They are usually found within 50 feet of the surface, even when over waters that are hundreds of feet deep. They prefer water temperatures of 58-62 degrees Fahrenheit. In the spring and fall, they are often found in the shallows near stream outlets. During the lake-dwelling part of their life cycle, they primarily feed on baitfish like Alewives or Emerald Shiners, although at times they will feed on insects and other aquatic life. Although they feed primarily in mid-depths, they do occasionally take surface insects. In early summer, they can often be found near the surface among thermal bars of mixing water temperatures. These areas, called “scumlines”, attract insects and baitfish, which then attract the Steelhead. Great Lakes Steelhead enter their spawning streams from late October to early May. Although many Steelhead enter the rivers in the fall and overwinter there, spawning does not occur until spring. The fall-run fish are typically the first to spawn, often in March, followed by the spring run fish in April. Spawning takes place in a bed of fine gravel, usually in a riffle above a pool. Steelhead don’t necessarily die after spawning; they may live to reproduce several times.

I hope that motivates you to get out and enjoy this warm fall weather.